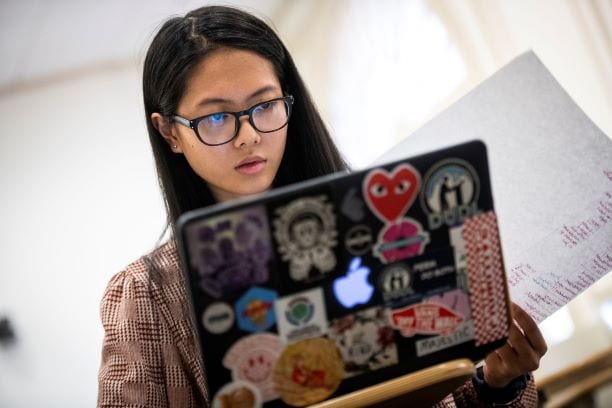 February 19, 2021 – Can our school’s young debate team survive during the pandemic? I doubted students would show up to online debate meetings and attend virtual debate tournaments. With our Hancock College Prep debate team starting its third year, I thought remote learning would devastate our team’s participation.

In September, over fifty students showed up to our first virtual meeting.

When I saw in a NAUDL tweet that next year’s potential topics included diplomatic engagement with Pakistan or Russia and state recognition of Kurdistan, I thought, “Wow, how do I sell those topics?” (Honestly, I didn’t know how I, as coach, would care about those debates.)

I hoped the resolution about water resources or changes to our election law would rise as natural conversation and debate topics. With the state of our country after this presidential election, and with climate change being the biggest force affecting the teen generation, we needed one of these topics.

Addressing relevant, ubiquitous topics helps teens gain a better understanding of the world in which they will live as adults. About ten years into my teaching career, I learned that the only way to make long-lasting changes that benefit minoritized students rests in policy development and change. The debate experience helps our Chicago Public Schools students gain this insight at a young age.

I wish debate had been around in Chicago Public Schools when I was a high-school student in the late 80s. The complexity of thought that I see students develop through this debate experience remains incomparable to any educational experience I’ve seen in over twenty-five years as a teacher.

I have to be honest: the whole “read as fast as you can” approach to policy debate seems awkward and disconnected from how people interact in the real world. So I don’t coach my students to “spread.” I teach them to comprehend, to listen, to expand ideas that connect. These are the life-long skills that will help students as they go on in life.

Coaching debate remains one of the best professional decisions I made. Three years ago, I accepted this responsibility two weeks before the first tournament. That year, I felt like I never caught up. The cases just got bigger and bigger. This year, remote learning reminded me of the value of slowing down, of thinking, of planning, of doing one’s best and accepting what will be.

Our Hancock College Prep Debate Team continues to make a name for itself in our Chicago Debates Red Conference. The competition gets tougher each tournament. But students walk away feeling accomplished–with quite a few trophies and medals. And they return to our virtual meetings each week.

Many of the students who showed up for the first meeting didn’t stick around. Some realized the debate commitment proved too demanding during this virtual setting. But we still have a strong core of debaters who remained dedicated. Last week, we picked up two new members.

Debate isn’t for everyone. But for those students who want this challenge and opportunity, debate must exist as an option in our schools.

Ray Salazar has been a Chicago Public Schools educator for over 20 years and has a passion for amplifying the student voice. In addition to his roles as writing and journalism teacher and debate coach, Ray also sponsors an after-school podcast club at John Hancock Preparatory High School. For ten years, Ray has written about education and Latino issues at the White Rhino Blog.  Follow him on Twitter: @WhiteRhinoRay.