I RESOLVE Home I RESOLVE SponsorsDonate 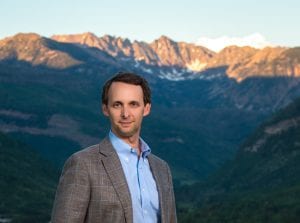 David is the Executive Vice President and General Counsel of Vail Resorts in Colorado.  Vail Resorts is a publicly traded company that owns and operates 37 ski resorts with approximately 60,000 employees, located across 3 countries and 14 states domestically.  In his primary role as General Counsel, David is responsible for the legal affairs of the company, including litigation, employee and labor issues, regulatory matters, strategic development and compliance.  David also has executive responsibility for the public affairs function at Vail Resorts, including community, state and federal government relations and Vail’s sustainability program.

David previously held the position of Senior Vice President and General Counsel for DaVita Kidney Care, and had several roles during his 8 years at DaVita, including Chief Compliance Officer and Chief Special Counsel.  Before joining DaVita, David practiced law with firms in Philadelphia, Washington, D.C., and Connecticut. David also proudly served for four years as a trial attorney with the Civil Frauds Section of the United States Department of Justice in Washington D.C. David holds a law degree from the University of Connecticut and a bachelor’s degree in economics from Trinity College (CT).

David lives in Denver with his wife and two kids.  He is actively involved with several community organizations, including serving as a board member for the Denver Metro Chamber of Commerce and trustee for Colorado Academy. For fun, he loves to mountain bike and ski.