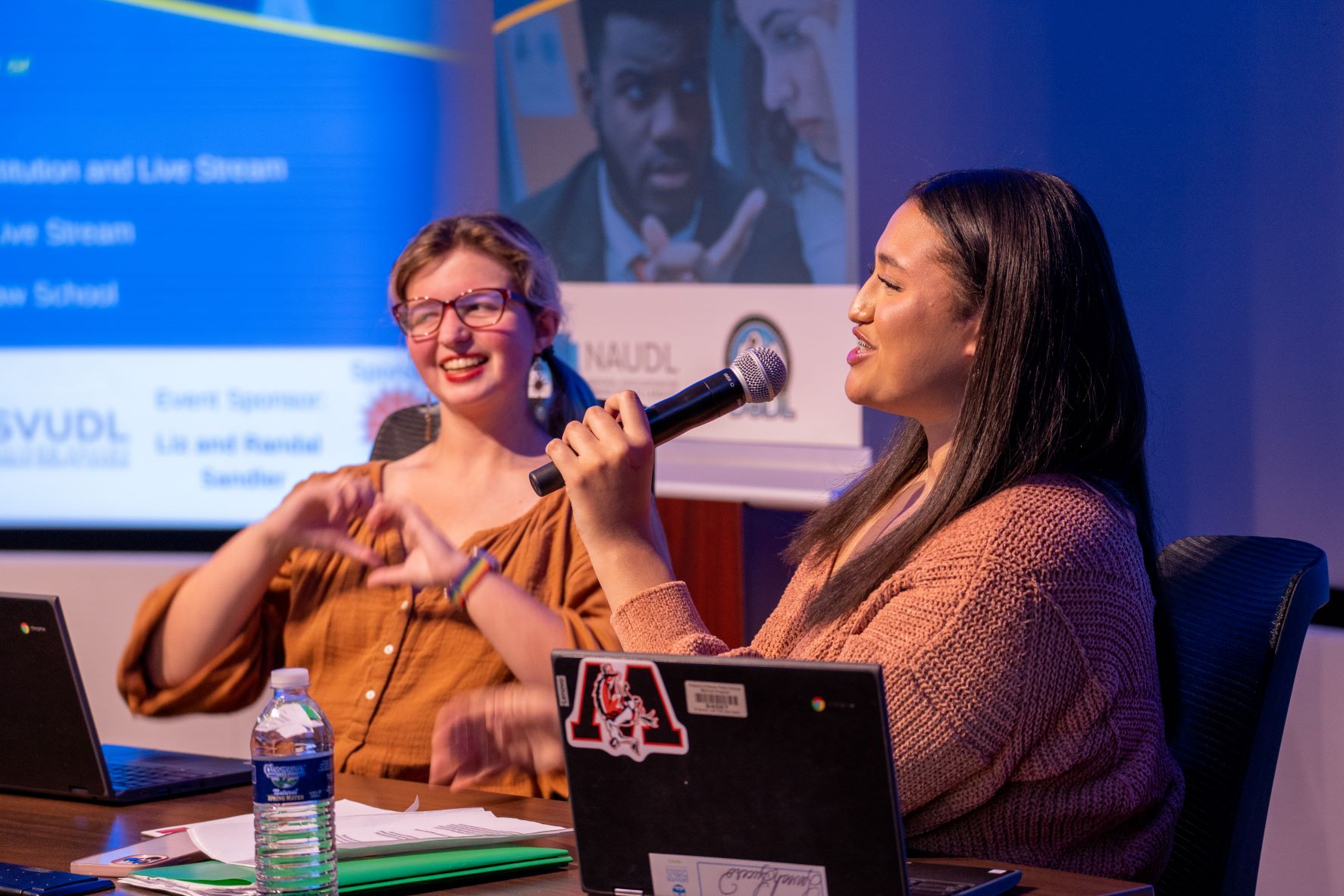 November 23, 2022 – As we move into December and the traditional “Season of Giving,” I have been thinking about the “art of the ask,” particularly as it relates to fundraising. In the business and consumer world, active transactions happen all day, every day. Goods and services are traded for currency – a mutual exchange. However, in the nonprofit world, the ask is a little more delicate, as it is a third party that benefits from our “product.” With our donors, we offer more of a contract, or promise, of impact.

This fall, NAUDL hosted our I RESOLVE Public Debate Series in collaboration with three league partners in three prestigious spaces: The Brookings Institution in Washington, D.C., Metropolitan State University (MSU) in Denver and Stanford Law School in Silicon Valley. As I reflected on these events, our third year of programming – and our first in-person presentation, I felt compelled to share a few notable moments of impact.

I RESOLVE showcases the power of high school debate for a public audience while exploring some of the most pressing issues in our society (this year’s topic was social media and disinformation). The program also demonstrates NAUDL’s role in amplifying youth voices and developing confidence for future success. The benefits of our mission, and in turn, high school debate, extend well beyond improved grade point averages, critical thinking skills, or graduation rates (although those are certainly proven outcomes). Our work is also validated by creating unique opportunities and broadening the horizons of the students we serve.

This special brand of impact was palpable at our D.C. event where one of the esteemed panelists remarked, “I am with Brookings, and I have been fortunate to be a part of some great events here, with some high-powered people, but I can assure you, the intellectual firepower onstage tonight is as high as it’s ever been – and probably and higher than it’s ever been.” Can you imagine – as a 16 or 17-year-old – hearing such a tremendous vote of confidence and praise of your craft?

This qualitative effect was also on display as I observed I RESOLVE debaters beaming in photos as they held up posters featuring their personal quotes around what I RESOLVE means for them. We thought the posters would add some personality to the venues, but did not realize they would elicit such an immediate sense of pride – with debaters and coaches taking the signs with them to display in their classrooms and to share the I RESOLVE experience with the rest of their teams.

At the close of the final program, we received a note from the Silicon Valley league Executive Director Rolland Janairo. His message included this gem: “After the energy subsided and the students had hopped onto their shuttles home, I was waiting with first-year debater Nick for his parents to pick him up. Unsolicited, he talked about how much it meant to be inside a classroom at the Stanford Law School, and vowed to get his grades up so he could sit in that chair again as an official law student. The seeds that have been planted for our league and students will take time to sprout and bear fruit, but they are well under way.” If that isn’t inspiring, I don’t know what is as a leader.

So, that leads me back to the concept of the (nonprofit) ask. Giving Tuesday, a global movement of generosity, is November 29 and NAUDL’s year-end appeal will follow in many of your inboxes and mailboxes. This year we celebrate “A Future that Flows,” and we hope that you will consider donating to NAUDL programs and events.*

I can guarantee that we will continue to uphold our end of the exchange, as we are privileged to share our achievements with investors, large or small, who enable us to cultivate the skills, talents, and aspirations of the 7,000+ students who are active in the Urban Debate Network.

*Flow noun (1) a special form of note taking that debaters use to keep track of all of the arguments in the round (2) a mental state in which a person performing an activity is fully immersed in a feeling of energized focus.

I RESOLVE was made possible through the support of Event Sponsor Liz and Randal Sandler, Sponsor The Asia Group Foundation and supporter NextEra Energy.