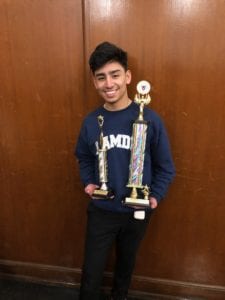 “Debate holds me down and keeps me grounded in ways that no other activity does.”

Diego Flores praises his coaches and mentors at LAMDL for the guidance and unconditional support he has received over his time in debate. He says that it has inspired him in his approach to teamwork, mentorship and in his service to others. Moreover, this encouragement has instilled a sense of perseverance and an understanding that cultivating a full idea is the best way to communicate one’s believes.  “The community I can call home are the people at LAMDL,” says Diego. The feeling is mutual — his nominator applauds Diego’s integrity and passion, as well as his motivation to learn, improve and produce high quality work.